This weekend, Jeff and I took off headed for McCormick’s Creek State Park.  But we didn’t make it.  We followed the signs for Cataract Falls Recreational Area instead.  We are suckers for waterfalls.  This one is dubbed “Indiana’s largest” at 86 feet, but there must be an asterisk somewhere because it takes over half a mile to get down the whole way.  We also realized as we drove in that we probably chose the driest time of the year in one of the driest summers on record to go see some waterfalls.  Amazingly, there was still some water going over both the upper and lower falls.  I suppose that is why we were basically the only people there though.  We were able to walk out over the areas that are probably usually covered in river, so that was kind of neat.

Unfortunately there wasn’t a lot to do here other than look at the waterfalls.  We took a little mile loop hike and we had officially seen everything this park had to offer.  At this point, it was too late to keep going to McCormick’s Creek so we headed back to Cloverdale for dinner at “The Ice Box.”  Since we have already eaten at Chicago’s Pizza there, we think we have hit all the best places of Cloverdale.  Although we haven’t gone to “Restaurant” yet.  Maybe next time, when we actually make it to McCormick’s.

part two of the upper falls 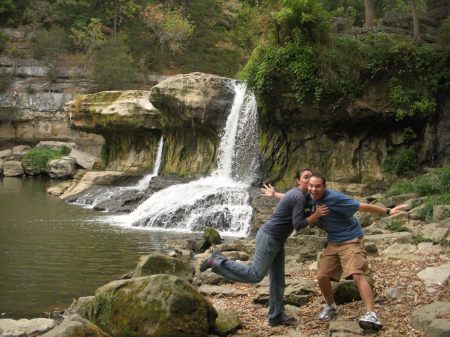 we barely beat the timer! 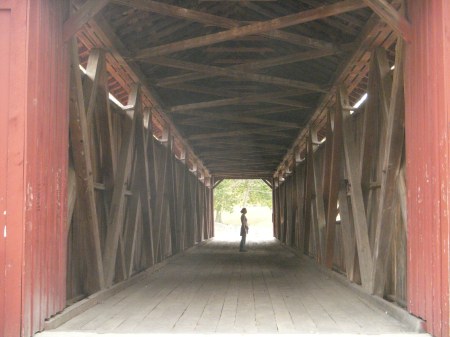 inside the covered bridge

the lower falls… and then the camera died 😦

Howdy y’all!  Jeff and I just got back yesterday from a long weekend trip to West Virginia.  We wanted to get as far away as we could without spending the whole weekend driving there and back.  So we settled on WV.  We sort of did end up driving quite a bit because we drove through a large part of the state, but it’s a small state.  We saw lots of cool nature stuff.  We did not see a lot of people.  We spent two nights in a very small tent and one in a Holiday Inn Express with a really sweet breakfast.  We saw two friends from our past.  I’ll save the rest for the video.  5 stars for West Virginia!!

A lot has happened in the last week and a few days… the world lost four celebrities and now I just heard that Disney lost one of its “cast members” in a monorail accident (Mark, I’m glad you’re safe and sound in Indiana!). In our little corner of the world, things have also been hopping, so here’s a little recap for you…

Meghan and I played host to a fun and fairly random event last weekend – our friends Jess and Steph’s Birthday Prom. We had somewhere in the neighborhood of 23 people over, all dressed to the hilt. Most of the evening’s activities took place in our backyard, where we took a lot of great pics of some classic prom poses, danced under the stars to Steph’s prom playlist (which would’ve rivaled any wedding reception DJ’s), and played a game or two of bocce ball (of course!) by the light of paper lanterns.

Inside, we laughed to the point of tears as we listened to Jordan’s hilarious and self-composed musical toast to the two birthday girls. It was definitely a Magical Night to Remember Under the Stars on Broadway.

In a mysterious overnight transformation, Meghan became Dr. Miller with the power to write prescriptions, order tests, and make vital life-and-death decisions in the care of her patients. No one knows how these powers are suddenly granted, just that they are and that along with them comes the responsibility of knowing what you’re doing and making the right decisions. This all may seem like a piece of cake and child’s play until you realize that her first day of being a doctor was in the ICU where she was surrounded by dying patients and serious medical emergencies. In fact, no sooner had she completed the walking tour of the floor than she got her first page and was soon thereafter confronted with the death of her first patient (no, it was not her fault!). Needless to say, it has been a highly challenging first few days, although things have seemed to calm down a bit over this weekend. She’ll be on ICU for this month, working 11- to 13-hour shifts everyday except for the four days she’ll get off this month. Please be praying for her stamina and quick “learning of the ropes” as she gradually begins to feel more and more like the real doctor that she is.

Meghan and I both had the day off on Friday, and we had made no definite plans since Meghan was feeling exhausted from the last two days of work. So we decided to take it easy and just go on a fun little bike ride around our neighborhood and beyond. Well, the “beyond” turned into something a little more than just “fun” and “little.” In talking to our next door neighbor Joe, he informed us that there was a bike route that existed to get from our neighborhood (located at the 62nd Street level on the map above) all the way to White River State Park downtown, all the way avoiding major roadways. Well, we half paid attention to his directions at the time, but enough that when we tried looking it up on our own before we left, we came up with a fairly clear picture of how to do it. When we left our house, I don’t think either of us had honest intentions of making it that far, but as we guessed our way along the route and kept being rewarded with progress, we finally decided to go for it and arrived downtown an hour and a half later. What followed after that was some of the most brutal agony I have endured in recent memory. Having chosen not to bring my wallet along or any means of purchasing power, we were not able to stop and eat a quick lunch or even buy a sno-cone from the ice cream truck we passed. Fortunately, we had a bottle of water along, but that did little to relieve the searing pain in my legs with each downward stroke of the pedals. This is mostly a story of how badly I am out of shape… Meghan faired much better than me. After stopping every half mile or so to walk and over two and a half hours later, we finally made it back into our driveway. I proceeded to throw my helmet across the yard in anger and painful frustration (and embarrassment?) and crawled into the house. We spent the rest of the day recovering on the sofa, watching movies and the PBS Create channel (broadcast TV definitely has its limitations).

Google Maps informed me that our little route had covered around 25 miles… 15 miles longer than I had ever biked before in one go. Looking back, now that my legs work again and the bicycle seat imprint has left my bottom, I’m glad we did it and, other than the way back up, it really was fun and a pretty empowering experience to have traveled all the way to the heart of the city by our own means. Kind of makes me wish that I worked close enough to make my commute on two wheels everyday instead of four.

Today was an interesting and fun day. Here’s some highlights…

(I recorded this on my Macbook after several tries of it not saving correctly… sorry for the awkward shakiness as I moved the “camera” around. 🙂 )

Here’s to a great week ahead!